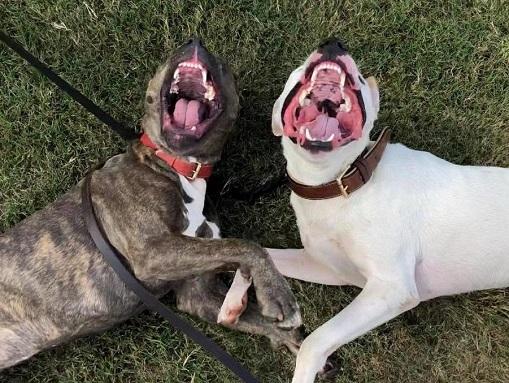 Share on Facebook
Why choose me? Update 11/20: 🎓🎓Diamond Jim has graduated from training and is ready to move to a foster or forever home!! – already knows basic manners – LOVES dogs and people – walks great on a leash Who can help Diamond Jim, the already trained and perfect addition to any household?? Update 10/8: Diamond Jim is in a shelter foster home. To make arrangements to meet him, please call the shelter at 706-613-3540 or message our Facebook page (Athenspets – GA)! Update 9/26: Diamond Jim is at school and learning lots of new things! Once a misbehaving and rowdy boy, he is now learning how to listen, receive praise, and knows the leash is NOT a toy to be played with when walking! He is available for adoption and in a few more weeks will be perfectly polished for his new home!!! Update 9/16: Diamond Jim and Naomi are playmates! They can only play together if a staff member is present, but if things are quiet around the shelter while you are visiting, you can ask if it’s a good time for a play date! He also does well with Jojo! Update 8/24: Diamond Jim has become one of our “go-to” dogs for testing with other dogs. We already knew that he played well with Chloe (see video), and he’s done well with others. Today he met Jackie and Jorge. Once again, he showed that he likes other dogs and wants to play! Diamond Jim’s Doggie-Day-Out Update 7/10: Took Diamond Jim for his first outing today! We went to Oconee Forest Park, and he did great passing by people and other dogs. It was hot, so our walk was short, and we headed back to home base for some air conditioning and toys. This guy has a lot of energy and loves to play with toys – he would be great for someone who is active or has an active pup to play with. Eventually though, he settled down and took a nap. He’s a very happy and sweet pup, seems fully housebroken, and is ready to go! Update 7/6: Diamond Jim came in as a stray, but he has most definitely lived in a home before. He’s CLEARLY housetrained. I’ve gotten him out the past 3 mornings and each morning his kennel is clean and he pees for almost a solid minute straight as soon as he’s out. He’s a great playful boy. He doesn’t seem to know much about basic manners, but that would be easy to teach him, as he looks to me for direction when I have him out. He also gave me zero fuss in getting a bath. So calm, still, uncertain, but totally rollin’ with it. After his bath he got a ‘good boy’ peanut butter filled Kong, and then a pig ear upon return to his kennel. He doesn’t show super well in his kennel because he’s usually excited to get out so he can do his business, but if you take him out, and spend a few minutes with him, I’m certain he will win you over. He’s just a teen-pup (3 yrs) and needs someone to show him some patience so he can learn his way to being the best boy ever! Update 7/3: Thanks to donations to the Spay/Neuter Fund, Diamond Jim is neutered and up-to-date on his basic vaccinations! Update 6/30: Diamond Jim got to have the time of his life today after a volunteer brought him a pig ear for a treat. Little did anyone know that he would make that treat last and last! He played with it (see his video!) and still managed not to eat it. It is the simple things in life, right? He’s a great boy, full of love and light, and would make anyone a great companion. He is housebroken, but needs a little leash training. If you are looking for your new best friend, look right here, for Diamond Jim is quite the perfect gem! Update 6/3: We’re happy to say that Diamond Jim has settled in and has been fine with male as well as female volunteers and visitors. Originally, the person that found him said he may not like men, but that hasn’t been the case at the pound. Diamond Jim is happy to play and be with anyone who takes him to an interaction pen. He’s all about pets, treats, and fun! Diamond Jim is a handsome dog with a gorgeous white coat, a patch of brown on one ear, and a brown spot shaped liked a diamond on his head. He had just arrived at the pound and was a little shy until he met another volunteer who joined us. Then he was all about pets and giving kisses. The person that found Diamond Jim kept him for a few days but said that her own dog was too hyper for him. She also said that he may not like men. Of course, since he was there for only two days, it might be that he was scared and needed time to feel more comfortable around men. We don’t know. What we do know is that Diamond Jim is a sweet dog and once he gets to know you, has tail wags and kisses to share!
Learn more about how you can adopt or rescue me!